Throughout his life, Norberto Odebrecht developed the facets of an entrepreneur, educational leader and human being. Having dedicated himself personally and professionally to the formation of future generations, leaving an inspiring legacy for hundreds of people in Brazil and in the world. Trust, to accompany, the three facets that will mark the life of Norberto Odebrecht.

"Our greatest asset and intangible and curiously does not consist of two balances: we are educated to exercise service - and to serve with joy, never as a sacrifice". 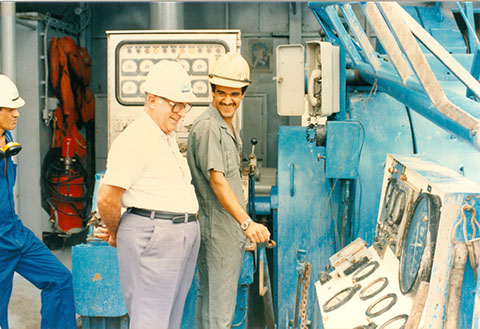 Norberto Odebrecht`s moral cornerstones for entrepreneurship were molded while he was still young: he inherited discipline from his mother, Hertha; education for work from his father, Emílio, and the master builders; and from walks alongside the Lutheran pastor, Otto Arnold, the certainty that serving is more valuable than being served.

It was in 1940s Salvador, characterized by shortcomings of all types in the infrastructure sector, where Norberto Odebrecht`s entrepreneurial career path emerged. His first challenge was taking on his father`s business, while he was still an engineering student at the Federal University of Bahia Polytechnic School. He opened a company with two students from his university, Francisco Valladares and Otto Schaeppi, and cleared the debts that his father had accumulated, by forging a political pact with bankers and through renegotiations. He also established an economic pact with his Clients, promising them productivity and shorter deadlines, and a social pact with the master builders. They were responsible for leading projects, his “small companies” and, in exchange, they received a share of the profits. Thus, not only was Norberto Odebrecht Construtora Ltda created, but an entrepreneur was also produced.

One by one, new projects flourished in Bahia following these agreements. The Rui Barbosa Courthouse, Hotel da Bahia, the Workers Organization and the Ilha do Fogo River Shipyard between Juazeiro and Petrolina, are a few examples. But they were not projects like all the others at the time. Norberto Odebrecht innovated with what was seen as a rule for civil construction at the time, where he installed all of the concrete structure, and only started to build the walls when the last slab was ready. Work was only performed once at his company: when the first slab was ready, and the workers started on the second one, the walls for that floor were put up. Therefore, he met deadlines efficiently, lowered costs and gained in quality. Everything to serve and respect the wishes of who mattered most throughout the entire process: the client.

For its innovative vision in the late 1960s, the construction company`s business reached greater heights, beyond the northeast, such as the construction of Rio de Janeiro International Airport (Galeão) and, abroad, with the establishment of businesses in Peru, Chile, Angola, Ecuador, Argentina and Portugal. The visionary, Norberto Odebrecht, emerged as an entrepreneur ahead of his time. By dedicating time and experience to his members and decentralizing decision-making, he formed not only partners, but people who were prepared to serve – and be entrepreneurial.

Norberto Odebrecht always encouraged his members to promote the development of their teams. This encouragement started with the example of life, both of the values received in family education, and those enhanced in his professional life.
“Above all, a leader is an educator, thinker and creator of teams. S/he has to be able to interpret, understand, practice and orientate the duties of life, expressed in the theory that every human being around the world is called to take part in the endeavor to recover and maintain healthy living conditions on earth,” he said.

Attention to forming new generations of leaders and education as a means, were some of the principles, concepts and criteria developed by Norberto Odebrecht, and set out in projects which resulted in Odebrecht Entrepreneurial Technology (TEO).

Besides being a source of intellectual inspiration, all the income obtained from the sale of TEO products, made by the Odebrecht Foundation, is reverted to the projects promoted by the institution`s Social Program, PDCIS.
Thus, it became possible to explain why all Odebrecht Group members should practice education for work, exercise planned delegation, support their members and identify and train their successors: these values and beliefs complement the art of entrepreneurship with the ethos of service, producing wealth, with ethics, integrity and transparency, for beneficiaries, communities, members, social investors and society.

Considered one of Norberto Odebrecht`s greatest legacies, TEO became not only the base of the Odebrecht Group`s culture, but a philosophy of life that breaks entrepreneurial barriers, by valuing human potential, such as the readiness to serve, the capacity and wish to evolve, and the desire to exceed results. 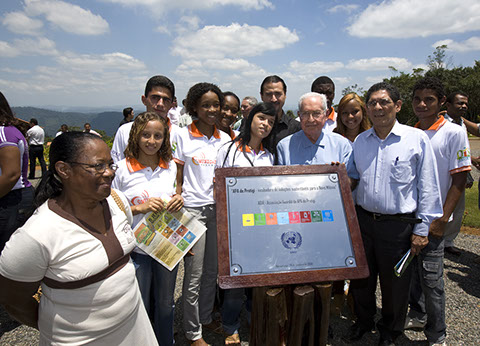 In addition to the many facets of the entrepreneur and educational leader, Norberto Odebrecht defended human development through the generation of opportunities. To this effect, he was dedicated to the social side in various ways throughout his life, having a strong ally for many years: Sister Dulce, canonized in 2019 as Saint Dulce of the Poor. Norberto affectionately called her “my teacher and professional mother”; Dulce became the entrepreneur`s advisor and friend during the 1940s. He learned numerous lessons from her, mainly from the way the Saint overcame the most challenging situations.

The first project carried out by the recently graduated engineer Norberto, was the Workers Organization of Bahia headquarters, the embryo of Obras Sociais Irmã Dulce (Sister Dulce Social Projects - Osid). Since then, the entrepreneur has been behind the construction of various buildings connected to Dulce`s projects, such as the Santo Antônio Educational Center – which started as an orphanage, and was one of the Saint`s main dreams. Norberto also helped to structure management technology that met the goals of the perpetuity of the projects, providing free services to the population.

In 1965, while still presiding over Construtora Norberto Odebrecht, the engineer took another step in the search to equate the problems that originated from the country`s social and economic structure: he established the Odebrecht Foundation. Through the institution, he put faith in encouraging research and actions to improve Brazilian workers` quality of life and, later on, concentrated on educating teenagers for life, from the observation that the values which consolidate the formation of human beings are established during this phase. Later on, he focused on creating an innovative, sustainable territorial development model that focused on young people in the rural zone: PDCIS.

Even after Norberto Odebrecht passed away in July 2014, the institution continued the commitment of keeping his legacy alive, in the search for the construction of a more harmonious and responsible society, with equal opportunities for all, advancing the PDCIS actions in the Southern Bahia Lowlands, and working so that the program is transformed into a self-sustainable model, with the capacity for reapplication in other contexts.